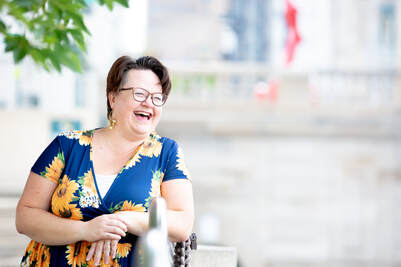 A native of Milwaukee, Jennifer Conrad-Proulx opened the Vocal Studio in 2001 and has since served on the voice faculty at the All Newton Music School in Newton, MA and the Community Music School in Buffalo, NY as well as Allen Hall at the University of Illinois in Champaign-Urbana.
Her students have been seen on tour with folk legend Joan Baez and opened for artists such as The Indigo Girls and Rusted Root.  Studio alumni have also performed Off-Broadway and on National Broadway Tours.  Students have placed in statewide NATS auditions, performed in state and honors choirs, and have been accepted into performance groups such as the Christian Youth Theatre (Milwaukee, WI), First Stage Theater (Milwaukee, WI), Milwaukee Children's Choir (Milwaukee, WI), Maine Repertory Theater (Biddeford, ME), Wheelock Family Theater (Boston, MA), Boston Children's Theater (Boston, MA) and Boston Children's Chorus (Boston, MA).

Alumni of the studio have continued their studies in colleges across the United States, including but not limited to: the New York Conservatory of Dramatic Arts, New York University's Tisch School of the Arts, SUNY Purchase, and Georgetown University.

Jennifer works with her students to instill a solid vocal technique that may be applied to various styles including musical theater, classical art song, and contemporary music. She also guides her students to becoming a more confident performer through performance preparation.

She remains an active member of the National Association of Teachers of Singing (NATS). Through NATS, Jennifer was one of fourteen national award winners of the 2016 Joan Frey Boytim Award for Independent Teachers. In 2020, she was nominated to the Wisconsin NATS board as a Member at Large.  She also joined the Speakeasy Cooperative in 2020. Jennifer remains an active adjudicator for WSMA and WI NATS Auditions.


Vocal recordings may be found on Soundcloud